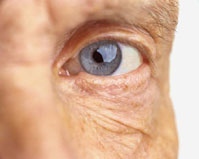 Few people are totally without sight. Most individuals today classified as "blind" actually have remaining sight and, thanks to developments in the field of low vision rehabilitation, can be helped to make good use of it, improving their quality of life.

Anyone with noncorrectable reduced vision is visually impaired, and can have a wide range of problems. The World Health Organization uses the following classifications of visual impairment. When the vision in the better eye with best possible glasses correction is: There are also levels of visual impairment based on visual field loss (loss of peripheral vision).

In the United States, any person with vision that cannot be corrected to better than 20/200 in the best eye, or who has 20 degrees or less of visual field remaining, is considered legally blind.

Visual impairments take many forms and exist in varying degrees.  It is important to understand that visual acuity alone is not a good predictor of the degree of problems a person may have. Someone with relatively good acuity (e.g., 20/40) can have difficulty functioning, while someone with worse acuity (e.g., 20/200) might not be having any real problems.