Glaucoma is a group of eye disorders leading to progressive damage to the optic nerve, and is characterized by loss of nerve tissue resulting in loss of vision. The optic nerve is a bundle of about one million individual nerve fibers and transmits the visual signals from the eye to the brain. The most common form of glaucoma, primary open-angle glaucoma, is associated with an increase in the fluid pressure inside the eye. This increase in pressure may cause progressive damage to the optic nerve and loss of nerve fibers. Vision loss may result. Advanced glaucoma may even cause blindness. Not everyone with high eye pressure will develop glaucoma, and many people with normal eye pressure will develop glaucoma. When the pressure inside an eye is too high for that particular optic nerve, whatever that pressure measurement may be, glaucoma will develop.

Glaucoma is the second leading cause of blindness in the U.S. It most often occurs in people over age 40, although a congenital or infantile form of glaucoma exists. People with a family history of glaucoma, African Americans over the age of 40, and Hispanics over the age of 60 are at an increased risk of developing glaucoma. Other risk factors include thinner corneas, chronic eye inflammation, and using medications that increase the pressure in the eyes.

The most common form of glaucoma, primary open-angle glaucoma, develops slowly and usually without any symptoms. Many people do not become aware they have the condition until significant vision loss has occurred. It initially affects peripheral or side vision, but can advance to central vision loss. If left untreated, glaucoma can lead to significant loss of vision in both eyes, and may even lead to blindness.

A less common type of glaucoma, acute angle closure glaucoma, usually occurs abruptly due to a rapid increase of pressure in the eye. Its symptoms may include severe eye pain, nausea, redness in the eye, seeing colored rings around lights, and blurred vision. This condition is an ocular emergency, and medical attention should be sought immediately, as severe vision loss can occur quickly.

Glaucoma cannot currently be prevented, but if diagnosed and treated early it can usually be controlled. Medication or surgery can slow or prevent further vision loss. However, vision already lost to glaucoma cannot be restored. That is why the American Optometric Association recommends an annual dilated eye examination for people at risk for glaucoma as a preventive eye care measure. Depending on your specific condition, your doctor may recommend more frequent examinations. 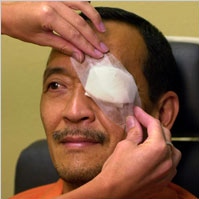 There are many types of glaucoma and many theories about the causes of glaucoma. The exact cause is unknown. Although the disease is usually associated with an increase in the fluid pressure inside the eye, other theories include lack of adequate blood supply to the nerve.

Primary open-angle glaucoma – This is the most common form of glaucoma. One theory is that glaucoma is thought to develop when the eye’s drainage system becomes inefficient over time. This leads to an increased amount of fluid and a gradual buildup of pressure within the eye. Other theories of the cause of the optic nerve damage include poor perfusion, or blood flow, to the optic nerve. Damage to the optic nerve is slow and painless and a large portion of vision can be lost before vision problems are noticed. Other theories also exist.

Angle-closure glaucoma – This type of glaucoma, also called closed-angle glaucoma or narrow angle glaucoma, is a less common form of the disease. It is a medical emergency that can cause vision loss within a day of its onset.

It occurs when the drainage angle in the eye (formed by the cornea and the iris) closes or becomes blocked. Many people who develop this type of glaucoma have a very narrow drainage angle. With age, the lens in the eye becomes larger, pushing the iris forward and narrowing the space between the iris and the cornea. As this angle narrows, the aqueous fluid is blocked from exiting through the drainage system, resulting in a buildup of fluid and an increase in eye pressure.

Angle-closure glaucoma can be chronic (progressing gradually) or acute (appearing suddenly). The acute form occurs when the iris completely blocks the drainage of the aqueous fluid. In people with a narrow drainage angle, if their pupils become dilated, the angle may close and cause a sudden increase in eye pressure. Although an acute attack often affects only one eye, the other eye may be at risk of an attack as well.

Secondary glaucoma – This type of glaucoma occurs as a result of an injury or other eye disease. It may be caused by a variety of medical conditions, medications, physical injuries, and eye abnormalities. Infrequently, eye surgery can be associated with secondary glaucoma.

Normal-tension glaucoma – In this form of glaucoma, eye pressure remains within what is considered to be the “normal” range, but the optic nerve is damaged nevertheless. Why this happens is unknown.

It is possible that people with low-tension glaucoma may have an abnormally sensitive optic nerve or a reduced blood supply to the optic nerve caused by a condition such as atherosclerosis, a hardening of the arteries. Under these circumstances even normal pressure on the optic nerve may be enough to cause damage.

Certain factors can increase the risk for developing glaucoma. They include: [back to top]

How is glaucoma diagnosed?

Glaucoma is diagnosed through a comprehensive eye examination. To establish a diagnosis of glaucoma, several factors must be present: Because glaucoma is a progressive disease, meaning it worsens over time, a change in the appearance of the optic nerve, a loss of nerve tissue, and a corresponding loss of vision confirm the diagnosis. Some optic nerves have a suspicious appearance, resembling nerves with glaucoma, but the patients may have no other risk factors or signs of glaucoma. These patients should be closely followed with routine comprehensive exams to monitor for change.

Testing includes: [back to top]

How is glaucoma treated?

Acute angle-closure glaucoma is a medical emergency. Several medications can be used to reduce eye pressure as quickly as possible. A laser procedure called laser peripheral iridotomy will also likely be performed. In this procedure, a laser beam creates a small hole in the iris to allow aqueous fluid to flow more freely into the front chamber of the eye where it then has access to the meshwork for drainage.

There is no cure for glaucoma. Patients with glaucoma need to continue treatment for the rest of their lives. Because the disease can progress or change silently, compliance with eye medications and eye examinations are essential, as treatment may need to be adjusted periodically.

By keeping eye pressure under control, continued damage to the optic nerve and continued loss of your visual field may slow or stop. The optometrist may focus on lowering the intraocular pressure to a level that is least likely to cause further optic nerve damage. This level is often referred to as the target pressure and will probably be a range rather than a single number. Target pressure differs for each person, depending on the extent of the damage and other factors. Target pressure may change over the course of a lifetime. Newer medications are always being developed to help in the fight against glaucoma.