Controversial Senate legislation to make health insurance more affordable for small business died with a procedural vote May 11, amid growing concern the measure would weaken the quality of health care coverage many Americans enjoy. 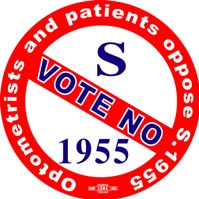 However, debate over the bill has elevated health care coverage issues—including key AOA concerns such as provider nondiscrimination protection—to a new level of importance on Capitol Hill, according to AOA Advocacy Group Director Jon Hymes.

That will be important if plans to reform the insurance market resurface in Congress, Hymes emphasized.

“This is an important victory in Washington for every optometrist and for all of our patients,” said AOA President Richard L. Wallingford, O.D.

“Optometry mobilized for the battle over S. 1955 and, as a result, Congress is now beginning to get the message about the harmful impact of discrimination by health plans against ODs.  All the hard work this year by the leaders and staff of AOA affiliates, our Advocacy Group volunteers, Congressional Keypersons and Washington Office has produced real results for optometry and sent a powerful message to our friends and foes in the nation’s capital.”

Although similar legislation – to create association health plans – was approved in the U.S. House several times over the last 10 years, it had never before advanced in the Senate.

As approved by a Senate committee in March, S. 1955 would have allowed the newly created small business health plans to discriminate against ODs and other providers, restricting optometrists from providing medical eye care services for their patients.

The AOA Washington Office, working closely with leaders and staff of affiliates, responded by launching optometry’s grassroots and direct lobbying effort to change the bill or defeat it.

Proponents, including the U.S. Chamber of Commerce, the National Association of Realtors and the National Federal of Independent Business, said the measure could help many small businesses provide health coverage for their employees in the same manner as large employers who now provide self-insured employee health plans under the terms of the federal Employee Retirement Income Security Act (ERISA). The small business insurance bill was modeled in part on ERISA.

However, to facilitate formation of the multi-state purchasing pools, the legislation, as originally drafted, would have exempted the new small business plans from state mandated benefit laws and other state insurance regulation.

The exemption from state insurance laws prompted other groups – including the American Cancer Society, the American Diabetes Association and the American Association of Retired Persons – to join with the AOA and other coalition partners to seek changes.

Critics noted the new small business plans might not be required to cover important services from prostate cancer screening to maternity care which are mandated for coverage under state insurance laws.

As Senate floor action on the bill approached, the legislation became the subject of widespread media coverage and even advertising campaigns by the business groups backing the bill and also by some opponents.

Although Republican leaders in the Senate had placed S. 1955 on a fast track for passage, it suffered a likely fatal setback on May 11 when Republicans fell five votes short of the 60 necessary to end a procedural challenge by Democrats. The vote was 55-43, largely along party lines.

With involvement of the 230 optometrists and students in Washington, DC, in early May for the AOA Congressional Advocacy Conference (see related article), AOA intensified its efforts to secure changes to S. 1955.

As the vote on S. 1955 approached, the AOA Washington Office learned that Sens Enzi, Nelson, Collins, and Murkowski would back non-discrimination safeguards that would be added to the bill to protect patient access to eye and vision care as well as protect optometrists’ right to provide that care.

These AOA Keypersons’ successful  S. 1955 lobbying efforts are reflected in the Collins-Murkowski amendment which was specifically designed to:

Hymes said the agreement on protections for optometrists, reached in the days prior to the May 11 procedural vote, would have been critical had the bill survived the vote and advanced toward enactment.

Provider nondiscrimination protections are a top priority for the AOA in Washington, DC, particularly as new instances of discrimination against ODs in Medicare managed care plans are uncovered.

“The AOA-backed Collins-Murkowski amendment to S. 1955 will help set a new standard for future debate in Congress over provider discrimination by insurers,” Hymes said in an e-mail bulletin to AOA Keypersons.

The amendment was strongly opposed by organized medicine as well as other special interests who were not only early backers of S. 1955 but supported the more far-reaching association health plan bills passed by the House of Representatives in recent years.

Hymes also credited an “overwhelming” response from AOA members who were asked to express their concerns to their senators by using the e-mail messaging provided though the AOA Legislative Action Center.